We are very happy to announce a new edition of Variable 4, taking place in September 2014 on Portland Bill. At the tip of the promontory of the Isle of Portland, Dorset, Portland Bill marks the southernmost point of an ancient stretch of Jurassic coast. Its rich maritime history and exposed weather conditions will undoubtedly create a perfect landscape for the piece. The installation is a part of b-side Festival 2014, a pioneering art festival commissioning new site-specific works across a range of media. We’re proud to be alongside an excellent collection of artists.

this season’s soho house magazine features an interview on variable 4, now available online and as a pdf (p17/18): http://t.co/UTLc7S9v

It’s with great pleasure that we can announce the third appearance of Variable 4 — and the first overseas (albeit still within British territory). From 22nd to 25th September 2011, the piece will be installed at Elizabeth Castle, Jersey, in conjunction with the Branchage film festival. This also the first time that the piece has operated over several days, running for roughly four days between 22nd and 25th. This is pretty exciting for us, as it means exposure to a much wider range of weather conditions.

Elizabeth Castle itself is just off the coast of St Helier, over a causeway which submerged outside of low tides. For the remainder of the time, it’s accessible via an aquatic vehicle (below). We’re already relishing the thought of loading up a van-full of meteorological and A/V equipment onto these little boats… Though sponsored by the festival, access to the installation itself will be free, bar the cost of the ferry trip.

New Scientist’s Culture Lab blog is one of our favourite places on the web to read about the intersections between art and science. They were kind enough to cover our recent London showcase, featuring some background on the piece and an astute observation of the similarity between Variable 4’s weather station and Futurama’s Bender

It also features Culture Lab’s first ever podcast, in conversation with James about the piece. Listen here. Another interview has also been published recently on Dazed Digital, alongside some staggering photographs by Drew Cox. Read here.

Some exciting plans are also emerging for Variable 4’s next appearance, in the changeable autumn. More on this very soon.

We’re very excited to have one last addition to the night we’re curating this Wednesday at The Book Club. Writer and curator Daniela Cascella will be joining us on our sound art panel, discussing sound-related practices from composition and storytelling to the issues involved in curating, presenting, documenting and archiving live sound works.

“Not being a musicologist or a musician, I never seek to examine the construction of a sound piece per se – I am interested, rather, in what comes after the piece: in the space between the work and what occurs around it. Working in the realm of sound and all types of leakage, expansion and cross-border transitions of sound toward other art forms, I also had to search for new ways of presenting sound and discussing it.”

Alongside an extensive history of curation, Daniela has written for Frieze, The Wire, Sound and Music, Il Giornale della Musica, and many more. We’re delighted to have her along.

Variable 4 showcase at The Book Club

On 22nd June, we are holding a Variable 4 showcase, discussion and post-Aldeburgh celebration at The Book Club, EC2. We’ll be presenting the piece and showing audio and video excerpts, demonstrating how it works under the bonnet and introducing some of the musicians and technicians involved with the piece.

Alongside this will be an informal panel discussion on sound in art, featuring some luminaries within the field: producer Joana Seguro (Faster Than Sound, Lumin), curator Cecilia Wee (Sound and Music, Rational Rec), BAFTA award-winning sound designer Nick Ryan (The Fragmented Orchestra, Papa Sangre), and writer and curator Daniela Cascella.

We’ll then be doing an eight-channel DJ set featuring some of the spatialisation methods devised for the piece — controllled with a windvane and anemometer interface. The world’s first meteorological DJing, as far as we know.

The event runs from 7pm on 22nd June, just off Curtain Road, Shoreditch.

Here in Aldeburgh, the first couple of days of setup have been arduous but fun. Thanks to herculean efforts, we’ve now got speaker trenches dug, circuitous cable runs laid, an operational weather station, an ad hoc surround-sound mixing room with iOS remote controls, a networked outhouse via festooned CAT-5, some lightboxed signage and — imminently — a beautifully-printed artists book to mark and document the installation. 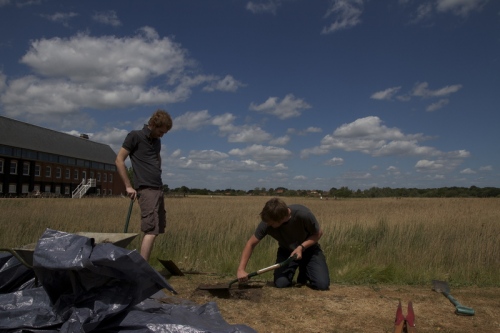 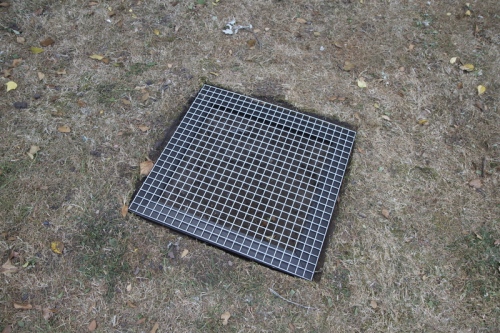 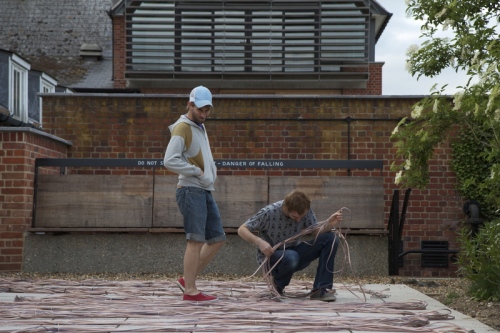 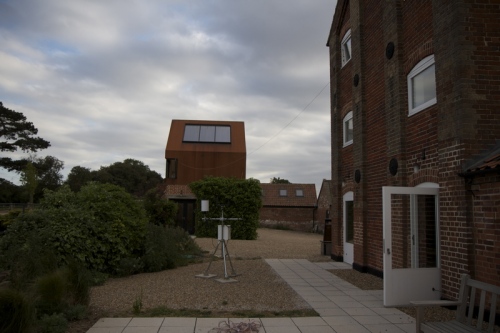 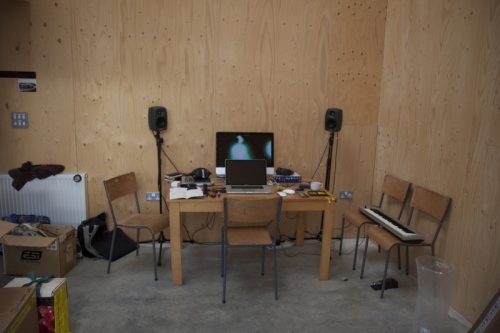 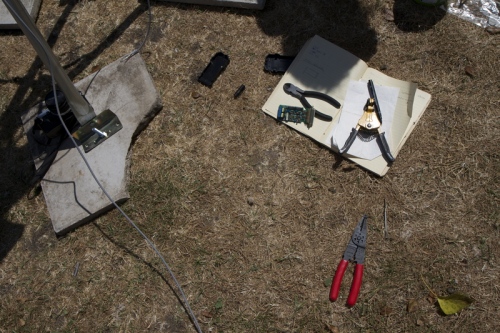 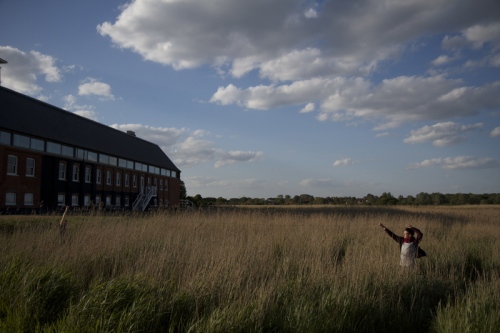 Because it’s a sunny Friday and we’re celebrating a highly successful Variable 4 field test yesterday, we’ve decided to give away a free pair of coach tickets to Variable 4 at FTS: Soundfields on 28th May. These will shuttle you direct from London Liverpool Street to Aldeburgh for a sound-art daytrip to the Suffolk countryside (travel details).

To enter: simply send an email to competition at variable4.org.uk, subject “Competition”, by 7pm Friday 20 May. We’ll notify the winner on Saturday morning.

For the day of the Snape Maltings installation, we’re delighted to once more be operating a direct coach journey from London Liverpool Street to the site of Variable 4 and Faster Than Sound: Soundfields. At less than half the cost of a train ticket, and running direct to Snape Maltings, it should hopefully save visitors time and money, and provide a memorable day trip to the Suffolk countryside melded seamlessly with cutting-edge sound art.

Book your coach ticket here. Bookings are done securely through Paypal, with a limited number of discounted early-bird tickets for those quick off the mark. Well, Variable 4 is over. With a neverending stream of tasks to attend to over the weekend, we sadly didn’t find the time to broadcast any live updates, but will be catching up with a series of wrapup blog posts.

After so many months of work, it was truly wonderful to finally be able to watch the piece in action as envisaged. The weather was beautiful — if consistent! — and it was great to have the opportunity to chat about the work with our varied stream of visitors. Thanks to all those who came down, and especially to the countless people who provided the project with their time and support. An excellent last-minute addition was an unexpected visit from ITV Meridian’s weather team, who came down to Variable 4 to broadcast an on-site weather report on Friday night. You can see the excerpt on our Vimeo profile.

We’ve also been working with a very talented radio producer to create a short documentary feature, forthcoming on Resonance FM. Watch this space for details — plus several backlogged blog posts that we’ve not found the time to yet publish.

An idyllic afternoon, data testing and tuning the sound spatialisation. The weather forecast for Saturday suggests that the weekend will be similarly sunny. It’s perhaps unusual for the organisers of an outdoor event to be hoping for changeable weather! IMPORTANT! For those intending to come down via public transport, please note that we have just corrected our travel information. Turns out that some previous details were out of date; many thanks to Liz Tucker for alerting us.

The recommended route from London is now the National Rail service to Ashford International (38 mins), followed by the 11 bus (timetable, PDF) to the Pilot Inn, which is a couple of minutes’ walk from the site. Do be aware before travelling that buses are relatively infrequent.

And don’t forget that we are also operating direct coaches from London Victoria, departing at 11am and returning at 6pm.